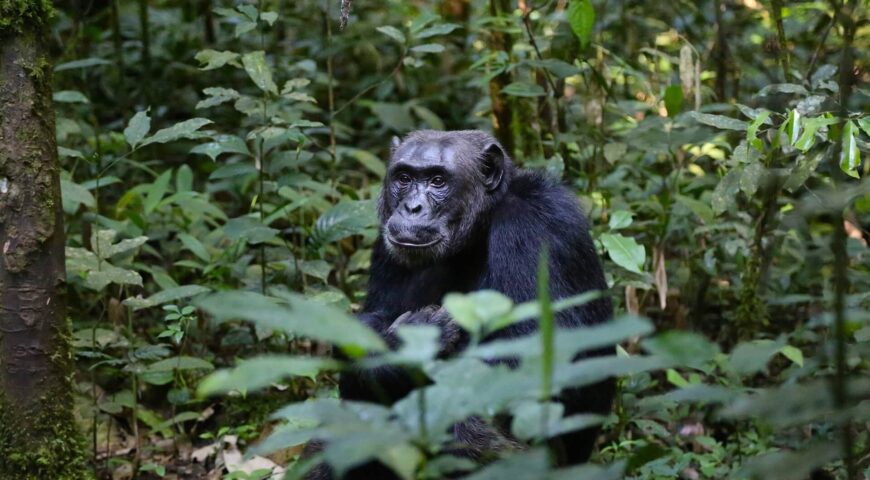 Chimpanzee Rescue and Sanctuary in Cameroon

When most people think of the African continent, one of the first things that springs to their minds are images of the fauna that inhabit the continent: lions, elephants, hippos, rhinos and monkeys. All of these animals have a home in Cameroon, including a wide variety of apes than many people refer to as “monkeys.” Perhaps most prominent among the apes that live in Cameroon are chimpanzees.

Chimps are classified as an endangered species, with population estimates ranging between 170,000 and 300,000 and some of the biggest threats to their existence are habitat destruction and poaching for the bushmeat trade, the latter of which is a particular problem in Cameroon. I had the opportunity to visit a sanctuary for chimps that have been orphaned by poachers and the experience was truly exceptional.

Getting to “Monkey Island”

The day began first with a ride from Douala, Cameroon’s largest and city and economic center, to Edea a small city about an hour and half bus ride away (2000 FCFA or less than $4), where we met with our driver Sebastian.

Hiring Sebastian for the day, who is familiar with this chimp sanctuary and the men who run it, costs a flat rate of 25,000 FCFA or about $45.

Sebastian took us to purchase fruit for the chimps (5000 FCFA/less than $9) and fuel for the boat (7000 FCFA/$12) that would take us to the different islands that the chimps live on. Admission to spend the day with the chimps was 15,000 FCFA (about $26) per person.

After taking care of our business in town, we then drove an hour and a half into the bush, to where the first Catholic church in Cameroon is along the Sanaga river. There, Bosco, the Cameroonian man who has worked as a caretaker for the chimps for the past 15 years, picked us up in a boat and took us to our first stop: the area where 4 young chimps (aged six and under) live.

All of the chimps that live in the areas protected by this organization have been orphaned by the bushmeat trade. As Bosco explained it, poachers will often intentionally kill a mother chimp so that they can raise the baby to kill for meat later. The poachers are either caught with the babies or are convinced to surrender them to the sanctuary, which is currently home to 24 chimpanzees.

We got off the boat and as we followed a path through a bamboo grove, Mandarin, Miel, Banan and Goyave, the four young chimps were meandering towards us to meet us. We then spent the next hour and a half just playing with our closest relatives.

Each morning, Bosco and another caretaker take the chimps out into the forest for a couple hour long walk. Then they come back and take a nap before taking another afternoon excursion into the surrounding jungle. It was very clear that these men care deeply for the apes and take excellent care of them.

Living in a Chimp’s Paradise

Once they reach age six, they are moved to an island, where there are currently eight adolescent and teenaged chimps. Because the chimps are encouraged to live more naturally and because grown chimpanzees are dangerous (they are still wild animals), visitors are not allowed off the boat to visit the chimps.

However, that is the reason for bringing all that fruit. They recognize the sound of the boat motor and gather at the shore, allowing you to toss the fruit to them and watch them eat it and interact with each other. What is especially promising here is that one of the chimps has given birth on this island. I even got to see the little baby clinging to its mother’s stomach as she timidly gathered some of the bananas we tossed ashore.

The final stop is off the shore of yet another island, where the chimps are moved after reaching maturity of over 20 years old. Currently there are 12 adult chimps living here and again, have successfully reproduced multiple times, which is encouraging. Once again, we tossed fruit ashore for them to snack on as we looked on.

For the duration of the short boat ride back to the church, where the car was parked and the hour and a half ride back to Edea, I had a goofy grin plastered on my face at the joy of this experience.